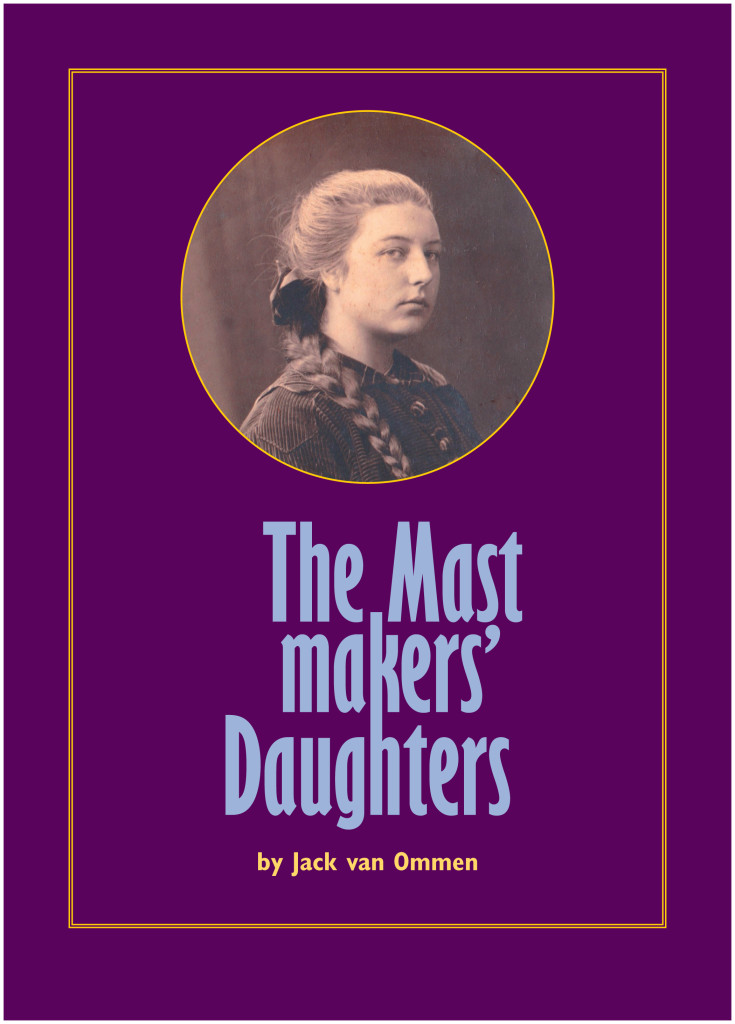 The original version is written in Dutch, by the same author, as: “De Mastmakersdochters”. The Mastmakers’ Daughters are cousins. They have the same name:  Rennie de Vries. Our main character grows up above her father’s mastmaker shop in a small seaport on the former Zuiderzee. Her three year younger cousin, born in 1904, grows up in Germany where her father started a mastmaker branch of the two century old family business. The German mastmaker family moved back to Holland in 1925. Rennie joins Hitler’s Nazi party. Our Rennie ends up in the 2nd World War Resistance. The young mother is arrested by the Germans. The story follows her through Dutch prisons and concentration camps Vught and Ravensbrück until the interception by the 12th infantry regiment of the 4th Infantry Division of the U.S. Army on her Death March out of Dachau.  The author managed to reconstruct one of the first complete accounts of the 200 Dutch women of the “AGFA-Kommando”. Van Ommen has used the, often very moving and personal, stories of a number of other prisoners of Rennie’s group. These courageous women survived the horrors by standing together. They prayed, sang, cried and laughed together. Rennie remembers their secret religious exercises with Corrie and Betsie ten Boom.  Van Ommen discovered a number of misconceptions and some shocking facts about the heroes and villains in the Resistance. He corrects a number of erroneous facts in Corrie Ten Boom’s “The Hiding Place”. This book also follows the Nazi Rennie after she flees Holland when the Third Reich begins to collapse. This book is not the standard war story in that it also covers the enemy within and the suffering of the Germans. Rennie’s husband kept a diary from the time of his arrest until Rennie’s safe return. Dick van Ommen was arrested by the same team leaders of the SS who four months later arrested the Frank family. He received one of the first issues of the “Diary of Anne Frank” from Otto Frank. Before Rennie could be repatriated, after the war’s end, she worked briefly for the American War Press contingent near Munich. The author, her son, was able to track down several of these men in the United States and there are names and photographs of them among the many illustrations of this book and on the slide show on this web site.

The alphabetical index contains nearly 350 names making it a very useful tool for historians of this period and geography. If you are related to a Frisian, a political prisoner, a German war criminal, Dutch resistance member or traitor you’ll most likely find your family name in the book.

The book’s first part is based on Rennie’s memoirs. It is a very personal account of her growing up in a small seaport, when the fishing and commercial fleet moved by sail and muscle, before running water and electricity; before the Zuiderzee was turned from a saltwater sea into a freshwater lake and the consequences this brought to the mastmaker and his customers. Her father was the fourth generation mastmaker of the family business that celebrated it’s bi-centennial in 2002. Rennie embraced the emancipation and was one of the founding members of the Dutch equivalent of our YWCA. This is a testimony of how an ordinary housewife and her comrades were capable of performing extraordinary acts of heroism.  But most of all, this is Rennie’s affirmation of her gratitude to be a child of God.

To keep the cost down, the Amazon 284 pages print version is only* available in Black and White photos and illustrations. On the Amazon page you will be able to read the book’s first three chapters. The E-book at Kindle is in color. To see the color illustrations  plus additional pictures of this story, go to the You Tube slide show.

Holland, Germany, France, Spain and Italy. (Just go to Amazon in your country and search for the book title): Kindle : € 9,50 Print: € 16,50 including shipping plus VAT/BTW
Holland: A print color version is available from the Dutch publisher €23,00

Reviews from Readers on Amazon.com: